Why are renters hunting for two bedroom houses?

As many of us get used to life away from the office, we have found that renters as well as buyers are looking to move into bigger homes with more space to work from home.

Our data analysts looked at the most popular homes among renters in September 2019 compared with September 2020, and the findings show a big change compared to this time last year.

In September 2019, the most in demand property type was a studio flat, followed by a two-bedroom house.

Last month, however, not only had two-bedroom houses overtaken studio flats as the most in demand home, studio flats had fallen seven places – behind bungalows and houses.

Across the rental market as a whole, asking rents have soared to an all-time high outside London to £964 per month, driven by record demand from renters.

The number of rental homes on the market is up by 20% compared to this time last year, though because of increased competition, available stock is up by just 2% nationally, but up by 80% in London.

London is the only region where rents are falling. They’re down 6.8% in Inner London, but in Outer London they’re up by 0.8%.

Asking rents have been falling since the beginning of lockdown in the capital, and are now an average of £110 per month lower than back on 23rd March at the start of lockdown.

What do the experts say?

Our resident property expert Miles Shipside explained that high levels of demand for bigger rental homes, which are usually more expensive, have pushed asking rents to a record high.

He said: “Landlords with a large portfolio of studio flats may find they need to accept lower rents than over the past few years, although let’s not forget that overall rents have gone up by £100 per month outside London and £140 in the capital over the past five years so those with a longer term view will still be able to make some good returns.

“It will be the accidental landlords that have one property that need a good agent more than ever, to promote the attractive attributes of their buy-to-lets. I’ve heard from some agents that they’re now advising their landlords to turn part of the living room into a work from home space, or offering to install high-speed broadband for tenants as an added incentive.

“The rise in demand for properties that have more space and that typically have higher rents is helping push up average rents to new record highs.” 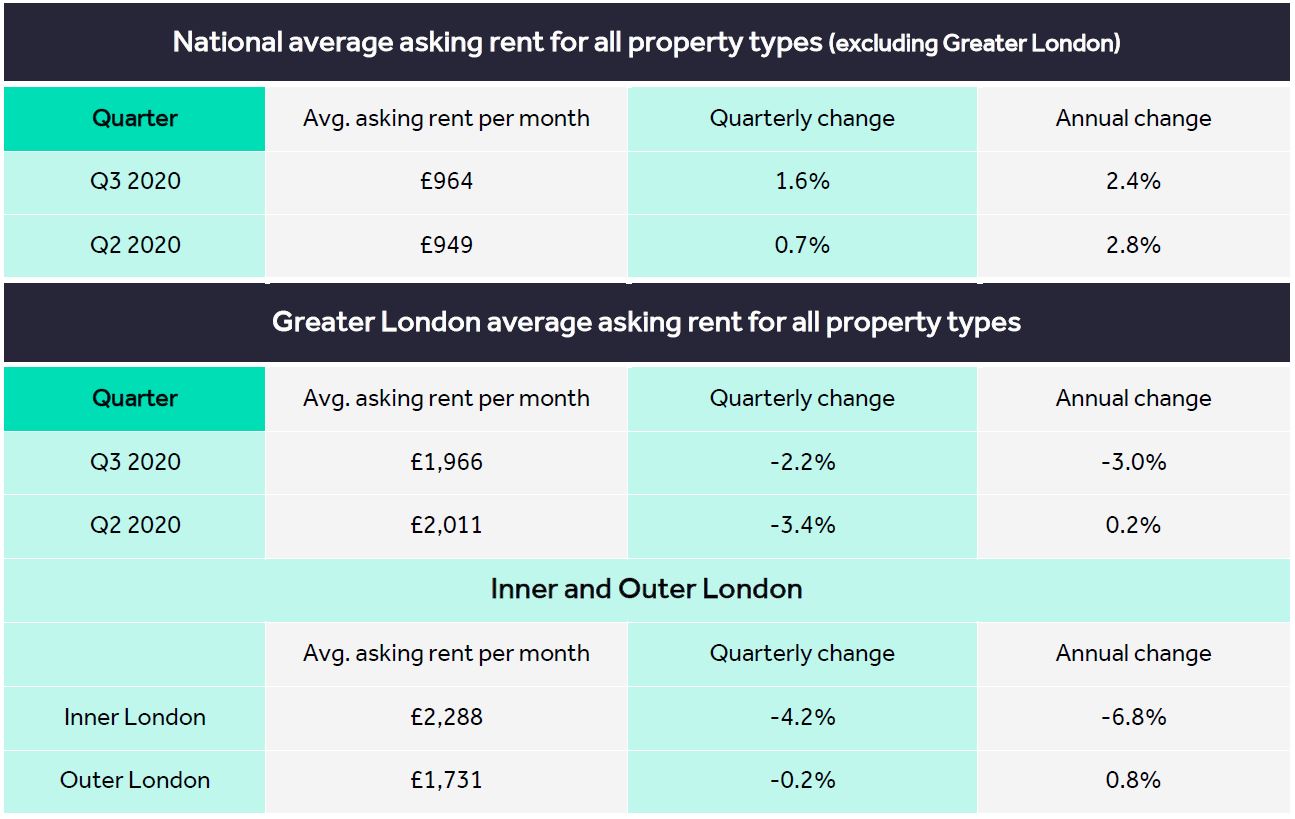 What are estate agents seeing?

Michael Cook, National Lettings MD at LRG, said: “We’ve moved more customers this September than any month previously, which is largely due to pent-up demand from tenants.

As some of the restrictions imposed during the pandemic began to lift, there was a documented surge in enquiries from renters who were restricted from moving over the spring. Changes to stamp duty also saw some investors take advantage of reduced acquisition costs of new properties and an increase in buy-to-let purchases.

However, we’re still seeing a gap in supply and demand and the need for more homes – many thousands more homes in the Private Rented Sector – is clear. At the same time, COVID has changed tenant priorities, with many now wanting bigger homes with gardens and a separate space to work in, and this now comes at a premium.

Demand for rental stock outside of London has outpaced that shown in the capital with a requirement for more home working space and gardens and a reduction in the need to be in such close proximately to the office, with more flexible homeworking being offered by employers. We’ve also seen houses increase in demand over flats with people looking to rent properties for longer, increasing average tenancy lengths.”

Categories
Tags
Ashtead Estate Agent Buying Fetcham House Prices House Prices Ashtead Leatherhead Lettings News Properties Values Rentals Renting Selling Tenants
Latest
The tenant eviction ban has been extended in England and Wales
How do you know when its time to upsize?
What are the guidelines we are following in line with the 3rd national lockdown?
What could happen to house prices during 2021?
Top tips for winter viewings